Empire of the Ants 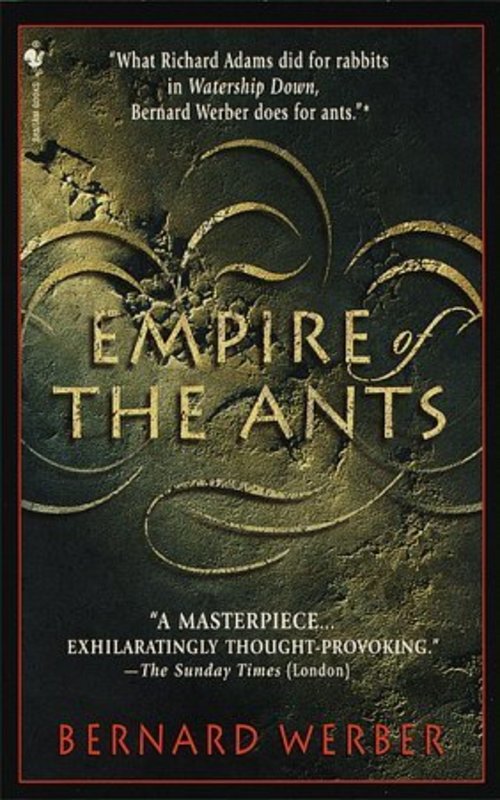 Empire of the Ants
309 Downloads

Here is the stunning international bestseller in the tradition of Watership Down but with a dark, original twist. Unique, daring, and unforgettable, it tells the story of an ordinary family who accidentally threatens the security of a hidden civilization as intelligent as our own–a colony of ants determined to survive at any cost…. Jonathan Wells and his young family have come to the Paris flat at 3, rue des Sybarites through the bequest of his eccentric late uncle Edmond. Inheriting the dusty apartment, the Wells family are left with only one warning: Never go down into the cellar. But when the family dog disappears down the basement steps, Jonathan follows–and soon his wife, his son, and various would-be rescuers vanish into its mysterious depths. Meanwhile, in a pine stump in a nearby park, a vast civilization is in turmoil. Here a young female from the russet ant nation of Bel-o-kan learns that a strange new weapon has been killing off her comrades. To find out why, she enlists the help of a warrior ant, and the two set off on separate journeys into a harsh and violent world. It is a world where death takes many forms–savage birds and voracious lizards, warlike dwarf ants and rapacious termites, poisonous beetles and, most bizarre of all, the swift, murderous, giant guardians of the edge of the world: cars. Yet the end of the female’s desperate quest will be the eerie secret in the cellar at 3, rue des Sybarites–a mystery she must solve in order to fulfill her special destiny as the new queen of her own great empire. But to do so she must first make unthinkable communion with the most barbaric creatures of all. Empire of the Antsis a brilliant evocation of a hidden civilization as complex as our own and far more ancient. It is a fascinating realm where boats are built of leaves and greenflies are domesticated and milked like cows, where citizens lock antennae in “absolute communication” and fight wars with precisely coordinated armies using sprays of glue and acids that can dissolve a snail. Not since Watership Down has a novel so vividly captured the lives and struggles of a fellow species and the valuable lessons they have to teach us.